Home Page d'accueil | News & Events | What is the Embassy Mural All About? 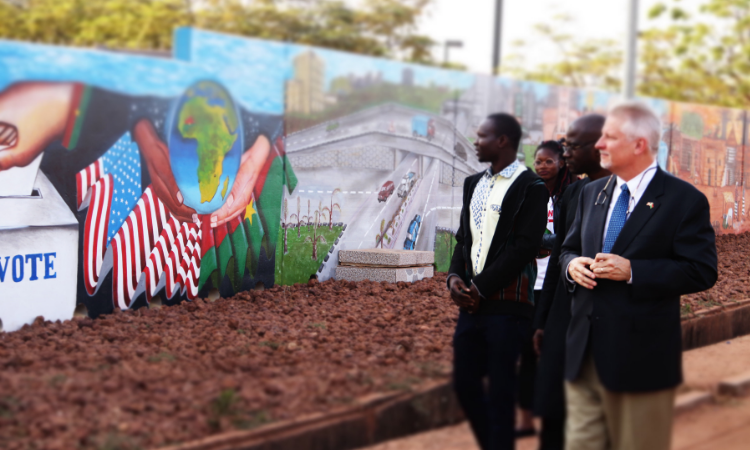 Ambassador Young with the Minister of Culture and the lead artist

“This mural is dedicated to the future of Burkina Faso to include an ever-deepening partnership with the United States of America.”

Beginning with the two children next to the U.S. Embassy Logo and moving right to left:  These joyous, optimistic children are the future of Burkina Faso; the future is based on the youth.  Both boy and girl are painted the same size representing gender balance and equal opportunity from birth.  They are wearing traditional clothing from which a pagne of Faso Danfani weaves through to the end of the mural.  This is to say that Burkina Faso will advance always from its own roots and its own resources, initiative, and beauty.

After the friendship flags and the Embassy Logo, we see the girl in headscarf studying.  The focus here is on girls’ education, and her notebook says, “le civisme c’est moi,” a nod to personal civic engagement and everyone’s responsibility to ask not what their country can do for them, but what they can do for their country.  The only other words in the Mural follow around the corner stating, “Je m’engage.”  This is the title and primary message of the mural.  Personal commitment to education, history, culture, partnership, voting, security, etc. is the key to progress and advancement.

After Je m’engage, there is a traditional leader presenting the now young women with her diploma.  This is to represent the passing of traditional knowledge to formal education both complementing each other.  The young educated women is between the traditional leadership and a traditional village, representing the link between tradition and advancement through education.  After the beautiful traditional village, there is a bridge over a spring connecting to an aspirational view of Ouagadougou including icons such as FESPACO (with a female director out front), motorcycles (with a male carrying a child – based on a real life photo), and new architecture and technology—well organized highway and airport.  In both the village and city scenes, the environment is clean, and characters are respecting traffic signals, and engaging equally in their society.

The city gives way to a map of Africa on a globe highlighting Burkina Faso with hands holding the globe representing the people of the world working together.  The next frame shows a large ballot box to highlight the importance of voting and democratic involvement.  We have a female candidate at a podium urging people to vote.  With the people’s vote, she becomes an elected leader and assumes power peacefully.

In the frame following, we see people practicing healthy hygiene; washing hands, boys and girls cleaning the compound, children reading, playing soccer, and playing the Kora, and inside, sleeping under a bed net.

Finally, all the main characters of the mural are together in a group forming a protective and caring circle around two new children who are planting a tree together.  There is a female soldier, a doctor, a farmer, and others in the community coming together to ensure the next generation grows into an equally safe, productive, and prosperous Burkina Faso.

The mural story finishes with the Faso Danfani trailing off and giving way to white doves, or the symbol of Peace in Burkina Faso, called the “Lwili.”  Growing out of the life fabric, the Lwili symbolize an ever-enlarging peaceful future.