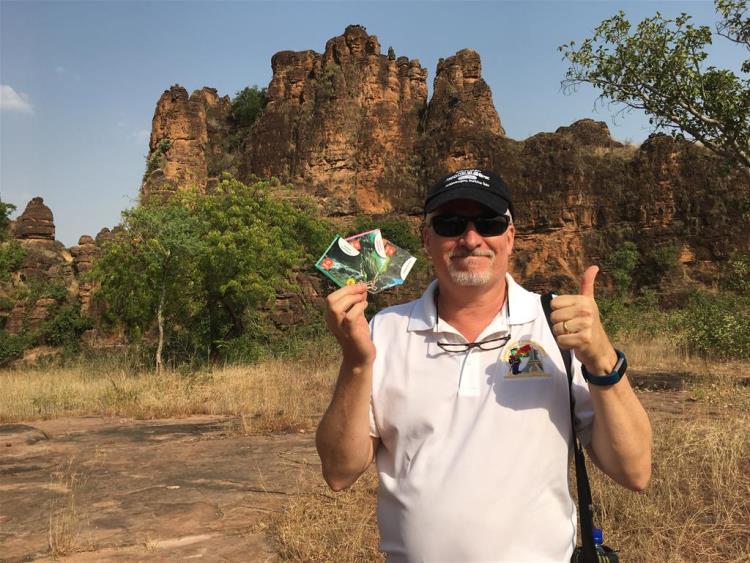 Ambassador Andrew Young hit the road visiting Diebougou, Bobo-Dioulasso and Banfora in the South-West regions of Burkina Faso from November 7 to 11, 2017. Joined by colleagues from the Consular, Political, Economic, and Public Affairs sections, the Ambassador looked to strengthen partnerships in the regions visited and support several Embassy projects.

In Diebougou, two local high schools featured four students and their experiences during an Embassy sponsored leadership program in the United States.  The Ambassador encouraged the hundreds of students in the crowd to continue the spirit of leadership and civic engagement embodied by the four youth representatives.

In Bobo-Dioulasso, the Ambassador hosted Muslim, Catholic, and Protestant religious leaders for a round table on religious tolerance.  He then joined a conversation with United States citizens living in the region covering security, consular services, and issues along the Burkina-Mali border.  Leaders from the Bobo Chamber of Commerce welcomed the Ambassador to reinforce economic commitments in the region.  At Université Aube Nouvelle Bobo, the Ambassador presided over a graduation ceremony for 50 students of the ACCESS English program.  Funded by the Department of State, ACCESS provides scholarships for a two year program that teaches English through social and economic development themes.

The Ambassador took time to learn a few dance steps with deaf students at Koko A school in Bobo where he praised the success of the program which saw eight deaf students successfully pass their Primary Studies Certificate last year.  The team then visited the GAFREH factory, a small local business employing more than 200 women who recycle used plastic bags into fashionable hand bags, dolls, key chains, and wallets.  Ambassador Young then spoke to potential students at the International Education Week fair in the Maison de la Culture in Bobo where Consular staff clarified visa questions and an Embassy panel answered questions about U.S. scholarships and education programs.

In Banfora, the Embassy team visited a cashew processing plant called SOTRIA-B lead by Kone Minata, an alumna of the State Department’s African Women’s Entrepreneurship Program (AWEP).  Madame Koné’s factory now exports to Costco and employs more than 450 people, 90 percent of whom are women.  The Road Show ended with a tour of natural wonders of Banfora: the Domes of Fabedougou, Cascades of Karfiguela, the Sindou Peaks, and the sacred Baobab of Toumousseni.