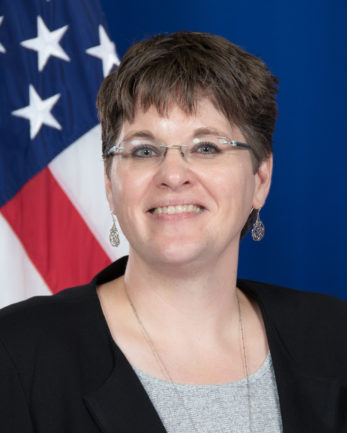 Shannon Cazeau joined the U.S. Embassy in Burkina Faso as the Deputy Chief of Mission in August 2018.  A career member of the U.S. Foreign Service, Ms. Cazeau most recently served as the Senior Foreign Policy Advisor at U.S. Africa Command within the Directorate for Strategy, Engagement, and Programs.  Previously, she served as the Counselor for Political and Economic Affairs at the U.S. Embassy in Addis Ababa, Ethiopia.  As the Deputy Director of the Office of Economic Policy Staff in the U.S. State Department’s Bureau of African Affairs, Ms. Cazeau focused on economic policy and trade issues affecting countries across the African continent.  Ms. Cazeau also spent six months as the Department’s Desk Officer for the Republic of Guinea after having served as the Political/Economic Section Chief in Conakry, Guinea.  Other previous Foreign Service assignments include Trade and Investment Officer in the Philippines, Vice Consul in the Philippines, and General Services Officer in Benin.

Prior to joining the Foreign Service, Ms. Cazeau won a Graduate Foreign Affairs Fellowship through the Department of State and as part of that program, interned in the Office of the U.S. Representative to the Arctic Council and at the U.S. Embassy in Ulaanbaatar, Mongolia.  Ms. Cazeau has a Master’s degree in Public and International Affairs from the University of Pittsburgh and a Bachelor’s degree in Political Science from the University of Alaska in Fairbanks.  She is fluent in French and has studied Russian, Mongolian, and German.  Ms. Cazeau is married and has two children.