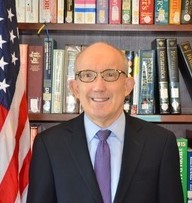 Sam Watson of North Carolina is a member of the Senior Foreign Service.  Previously Sam served as Deputy Chief of Mission in Monrovia, Liberia from 2016 to 2018.  Before going to Monrovia, Sam was Director of the Office of Monetary Affairs in the Economic Bureau where he led the U.S. delegation to the Paris Club.  Prior to that, he played a leading role in policy preparations for the August 2014 U.S.-Africa Leaders Summit.

Sam served as Deputy Chief of Mission at the U.S. Embassy in Bujumbura, Burundi and in Reykjavik, Iceland.  He was Chargé d’Affaires, a.i. for a year in both Burundi and Iceland.  Sam was Deputy Director and Acting Director in the Office for Russian Affairs from 2007 to 2009.  He has also served in Hanoi, Tokyo, Manila, London, and Kuwait.

Sam holds an M.S. in National Security Strategy from the National War College, an M.A. in International Relations from John Hopkins University School of Advanced International Studies, and a B.A. in English Literature from Duke University.  Before joining the Foreign Service, Sam was a Peace Corps volunteer in Morocco.  He is married and has two daughters.