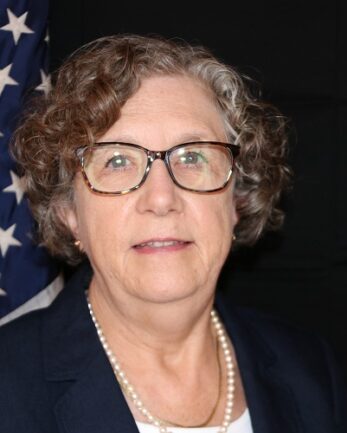 Sandra Clark became the U.S. Ambassador to Burkina Faso on September 25, 2020 following the presentation of her credentials to President Roch Marc Kabore. She served as senior advisor (2019-2020) and as the Director of the Office of West African Affairs (2017 to 2019) in the Africa Bureau at the State Department.  She served as Deputy Chief of Mission at the U.S. Embassy in Dakar, Senegal from 2013 to 2016.  Other recent assignments include State Department Senior Fellow at the German Marshall Fund of the United States based in Washington, DC, Deputy Coordinator in the Office of the Coordinator of Assistance for Europe, Eurasia and Central Asia (2010 to 2013) and Director of the Office of Economic Policy Analysis and Public Diplomacy in the Economic Bureau (2008-2010).

Prior to those positions, Ms. Clark held a variety of primarily economic positions in the State Department and at U.S. Embassies London, Tbilisi, Paris, Lagos, and Manila. She studied at the Ecole Nationale d’Administration in Paris, France, and has a Bachelor of Arts degree from Swarthmore College in Swarthmore, Pennsylvania and a law degree from Columbia University, in New York, New York.  She speaks French.

Ms. Clark and her husband have a daughter.