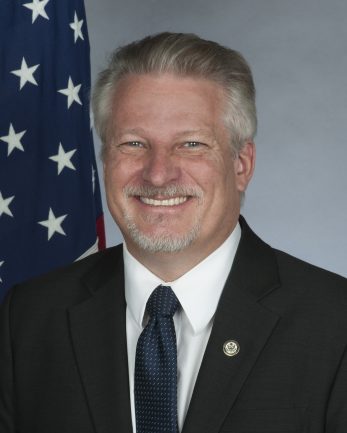 Andrew Young, a career member of the Senior Foreign Service, was confirmed by the Senate on September 28, 2016 as the next U.S. Ambassador to Burkina Faso.   Prior to this appointment, Mr. Young served as Deputy Chief of Mission at U.S. Embassy Bamako, Mali, where the Embassy’s inter-agency team addressed a wide range of challenges including securing a 2015 Peace Accord, confronting multiple terrorist attacks and successfully countering Ebola outbreaks.  On November 16, 2016 Andrew Young received the James A. Baker Award for Outstanding Deputy Chief of Mission.

Previously, Mr. Young served as Spokesperson at U.S. Embassy Seoul, Korea (2010-2013), Political Counselor at U.S. Embassy Paris, France (2007-2010), and Desk Officer for Italy in the Bureau of European Affairs at the Department of State (2005-2007). He also served as Foreign Policy Advisor to Senator Joe Lieberman (2004-2005), Senior Watch Officer in the Department’s Operations Center (2003-2004), and Deputy Principal Officer at U.S. Consulate Auckland, New Zealand (2000-2003).  Mr. Young served as Political Officer at U.S. Embassy Rangoon, Burma (1997-2000), Political Economic Section Chief at U.S. Consulate General Bombay, India (1995-1997), and India and Bhutan Desk Officer in the Bureau of South Asian Affairs at the Department of State (1993-1995).  He began his Foreign Service career in 1991 as Consular Officer at U.S. Consulate General Hong Kong.  Prior to joining the State Department, Mr. Young served as a Presidential Management Fellow at the Overseas Private Investment Corporation and the United States Department of Commerce.

Mr. Young earned an A.B. from the University of California Berkeley (ΦΒΚ) and an M.A. from the Johns Hopkins School of Advanced International Studies in Bologna, Italy and Washington, D.C.  In 2015, he received the American Foreign Service Association’s first Mark Palmer Award for the Advancement of Democracy for his work in Burma, on Capitol Hill and in Mali to promote democracy.