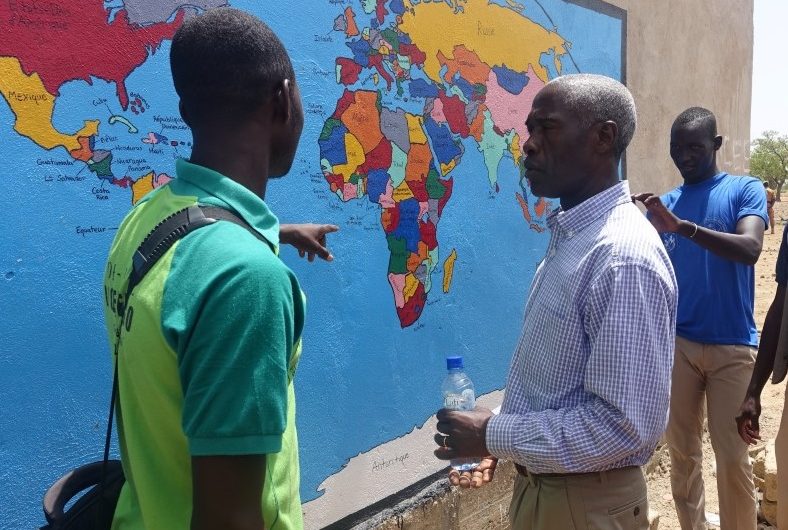 Ambassador Mushingi visited a peace corps volunteer in Nedego. This map was designed by the volunteer and her students

Washington, D.C. – Friends of Burkina Faso (FBF) is honored to present its second annual Award for Peace to the Honorable Tulinabo S. Mushingi, Ambassador of the United States to Burkina Faso. Nominated by several sources, Ambassador Mushingi has played an important part in maintaining peace in Burkina Faso throughout the tumultuous events of the past two years.

“Ambassador Mushingi is widely recognized and admired for his clear—and reciprocated—love for the people of Burkina Faso,” said FBF President Michael Lavoie. “Since 2013 he has advocated for development throughout the country and has proactively sought out promising synergies with the United States.

“The Ambassador has provided calm and steadfast support for peace,” continued Lavoie,  “during the political upheaval in 2014, through the attempted coup d’état of September 2015, through the peaceful election of the new democratically elected government in late 2015, and at present as that government addresses today’s challenges. In recognition of that exceptional service to peace and development, FBF is honored to present him with the 2016 Award for Peace.”

Ambassador Mushingi began his tenure in Burkina Faso in 2013, quickly demonstrating his joy of interacting with the Burkinabe people. Throughout his time in Burkina, Ambassador Mushingi has made it clear that he is the ambassador to Burkina Faso, not just Ouagadougou. The “American Road Show” has brought the Ambassador and his entourage to every corner of Burkina Faso, visiting schools, women’s groups, rural villages and towns across the country. His engagement with the public and his readiness to speak out during the events of 2014 and 2015 earned Ambassador Mushingi a nickname in the local Moore language—Sidpawalmdé, or “the truth shouldn’t be whispered.” As one wrote in nominating the Ambassador for this award, he was “never deterred from telling the truth to the Burkinabe leaders when necessary.”

In another letter supporting his nomination, the Ambassador’s youth outreach initiatives were well noted. “He has always been a reliable and responsible person in his work for democracy and peace in Burkina Faso,” she wrote, “in particular, in his interactions with the young Burkinabe, especially those in rural areas.”

For his exceptional candor, energy and openness to the public, Ambassador Mushingi will be awarded a statue designed and crafted by Issouf Sebgo of the Tigoung Nonma artisan group. In addition, the Ambassador will designate a nonprofit organization to receive a donation of $2,000 in his name. Award ceremony details will be announced at a later date.

About FBF’s Award for Peace

The Friends of Burkina Faso Award for Peace is given once a year to an individual who has made a substantial contribution in a powerful and innovative way to the development of Burkina Faso or to the growth of cross-cultural understanding in the service of peace. A nominee must be a Burkinabe, a returned Peace Corps volunteer, or a person holding extraordinarily close ties to the country of Burkina Faso. The award recognizes the contribution of individuals at all levels so as to offer them support and motivation and to raise up powerful examples of good works to uplift and inspire others.

About Friends of Burkina Faso

Friends of Burkina Faso (FBF) was formed in 1987. In 2001, FBF began supporting communitybased development projects in Burkina Faso, beginning with the Lambs Support Girls’ Education project. This effort was founded and administered by Association NEEED, a Burkinabe nongovernmental organization in the northern city of Ouahigouya. Since then, FBF has supported a wide variety of community-based projects whose focuses include:

• Construction of schools, a village pharmacy, and a rainwater catchment basin

FBF works closely with community leaders in planning projects, with the aim of empowering and strengthening local institutional capacity. The group welcomes any members interested in or connected to Burkina Faso and wanting to advance the growth, development, and promotion of peace in Burkina Faso while expanding awareness of Burkina Faso in the United States.