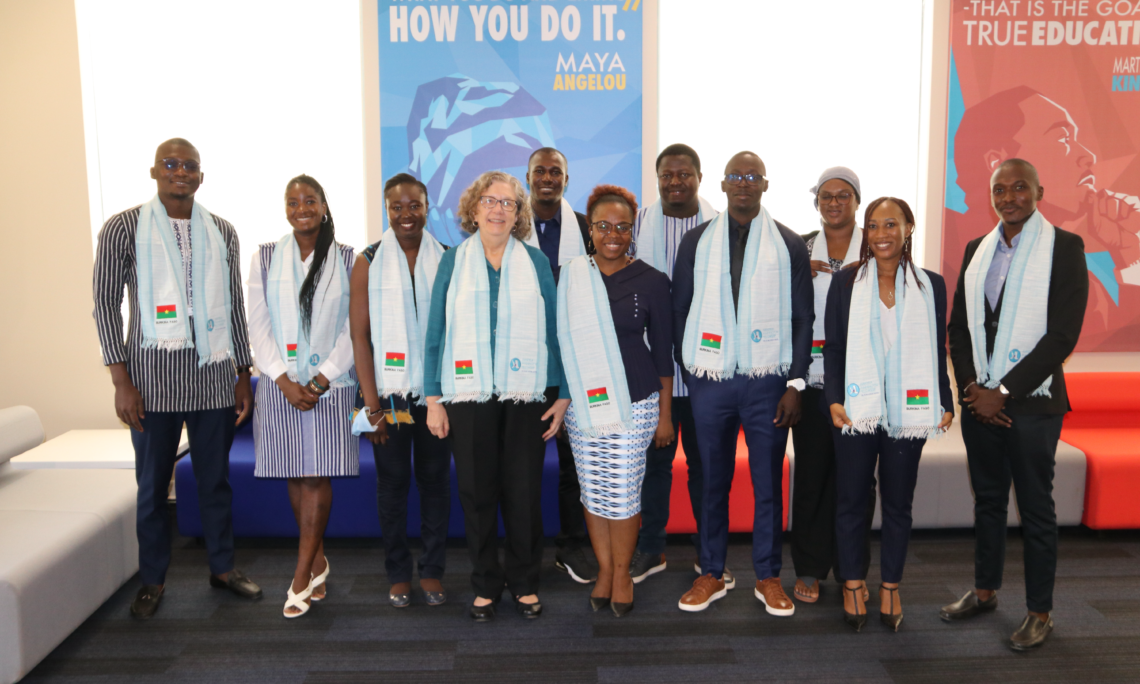 the educational and cultural exchange Programs give Burkinabe the opportunity to go to the United States for professional development and studies. The Public Affairs Section oversees the Fulbright and Hubert H. Humphrey educational exchange programs, the International Visitor program, and provides links to other exchange programs.

The YALI, Young African Leaders Initiative is an initiative of the US State Department. It began in 2010 under the patronage of President Obama. President Obama has always believed in the potential of African youth and decided to set up a platform for them to demonstrate their talent. The objective of this program is to support young African leaders in their efforts to promote growth and prosperity, strengthen democratic governance, improve peace and security on the African continent. The YALI is divided into 3 major programs;

The registration conditions differ depending on each program.

For mid-level professionals who are moving up into leadership positions in the public or private sector. This program offers an opportunity to develop one’s leadership skills and learn the latest in their field. Fellows spend approximately nine months in the United States taking graduate-level courses at a U.S. university, participating in long-term leadership development programs and engaging with professional peers from around the world in non-academic professional development activities. This is not an academic degree program. The goal is general professional development. Candidates must already have an undergraduate university degree, at least five years of professional experience, and be proficient in English (TOEFL score of at least 550).

This program is similar to the Fulbright Visiting Students Program, except that candidates can have English language training in the United States for up to eight months before their master’s degree program. The program is only available to candidates seeking a master’s degree and must have a TOEFL score of at least 550.

This program is intended for university faculty members or individuals working at independent research centers, museums, or other cultural institutions that have educational and research objectives. This program allows selected applicants to go to the United States to conduct research for three-to-nine months during the academic year. There is also a special program for persons who desire to do AIDS-related research or professional development in the United States. The disciplines eligible for the special AIDS program include: Sociology and social work, anthropology, education, economics, law, public administration, communications, art, theater, medical sciences, biological sciences, and psychology. A good command of English is essential, but no minimum TOEFL score is required.

The Fulbright Senior Specialists Program is designed to provide short-term academic opportunities (two to six weeks) for U.S. faculty and professionals. Shorter grant lengths give specialists greater flexibility to pursue a grant that works best with their current academic or professional commitments. Applications for the Fulbright Senior Specialists Program are accepted on a rolling basis, and peer review of applications is conducted eight times per year. Program Goals are:

These are intensive six-week seminars held in the U.S. each summer primarily for university faculty in other countries who teach about the U.S. in various fields of the humanities and social sciences in their home countries. Only candidates who are fluent in written and spoken English can be considered. The subjects of the Institutes are announced around mid-November and nominations are normally due in mid-March. The subjects of the Institutes change every year, but the subjects are always from the humanities and social sciences (and not from the sciences).  Often one of the Institutes is for Foreign Secondary Educators and is intended for secondary school educators who are involved in program development and who have a responsibility for curriculum and management. This can include secondary school teachers, teacher trainers, curriculum developers, education ministry officials, or textbook writers in the fields of English language, American literature, government, history, American studies, or other relevant subject areas that include significant content about the United States. The Institutes occur at U.S. universities during the summer months (generally in June, July and August). If you are interested in these programs contact Yolande Kaboré at the American Cultural Center in mid-November to learn the subjects of the Institutes and whether or not the Embassy is considering nominating candidates for one or more institutes. The competition for attending these Institutes is very tough and there is clearly a preference for candidates who have not previously had an opportunity to participate in any educational or cultural exchange program in the U.S.

This is a professional development program for secondary school administrators of English language programs in Burkina Faso.  The program allows selected applicants to attend a six-week summer program in the U.S. Interested persons can apply for this program in January of each year.

Each year the Embassy selects and sends about 10 Burkinabe to the U.S. for a three-week program that allows them to meet professional counterparts and to experience the U.S. first hand by traveling to several American cities.  Programs are conducted English and French. It is not possible to apply for this program. The Embassy selects the participants itself among established or potential leaders in government, politics, media, education, science, civil society, and other fields. The purpose of the IVP is to increase mutual understanding between Burkina Faso and the U.S. by bringing people with similar interests and professions together to share experiences and ideas.

This Program brings international teachers to the United States for a six-week program to take academic seminars for professional development at a host university and to observe and share their expertise with teachers and students at the host university and at local primary and secondary schools. Applicants must be current secondary-level, full-time teachers of English, English as a Foreign Language (EFL), math, science, or social studies including special education teachers in those subjects at institutions serving primarily a local population. Applicants must hold at least a bachelor’s degree or the equivalent and have completed at least five years of full-time teaching by the start of the program. Applicants should be able to demonstrate English language proficiency by attaining a minimum score of 450 on the TOEFL.